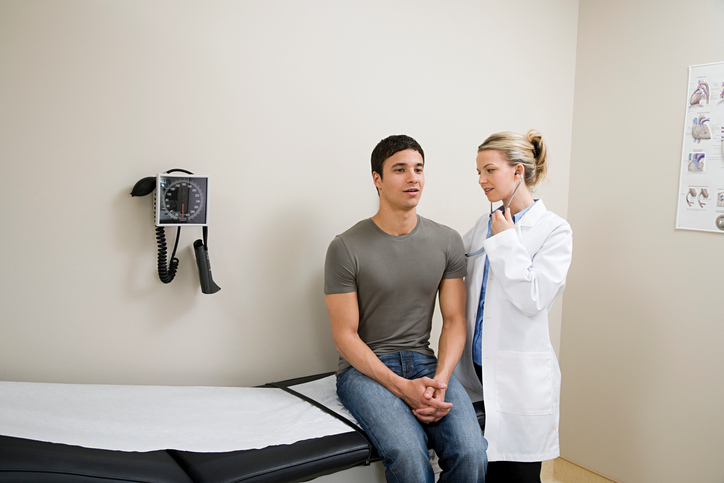 Urinary tract infections (UTIs) strike younger women more frequently than any other demographic, but men, particularly over the age of 50, are at risk as well – especially because when men get UTIs, they are often more complicated.1

But first the good news: Anatomy can be a man’s best friend. Because the male urinary tract is longer (going the length of the penis) and a male’s urethral opening is farther away from body parts that naturally harbor bacteria (specifically, the anus) men are less prone to UTIs than women. Additionally, a man’s genital region tends to be drier than a woman’s – so it’s less likely to encourage bacterial growth. Also helpful is the fact that secretions from the male prostate (a small gland, between the bladder and the penis) have some antibacterial activity.

Given these natural protections, when do men get UTIs? Often a UTI in a man will have some other contributing factor behind it, such as an obstruction or abnormality in the urinary tract, like a kidney stone or enlarged prostate. Did you know the prostate naturally grows as men age — typically going from walnut-sized at the age for 40 to lemon-sized at the age of 60?

Other UTI risk factors for men include: poorly controlled diabetes, HIV infection, having recently had a catheter (a tube in the penis to drain urine, common after surgery), or having any neurological condition that makes completely emptying the bladder difficult (such as Parkinson’s in its later stages or multiple sclerosis). Immunity-suppressing medications taken for other conditions can also increase UTI risks, as can being uncircumcised. In fact, studies show that uncircumcised men are four times more likely to get a UTI than circumcised men.2

So what does a guy’s UTI look like? Symptoms are similar to those in women and may include:

Less commonly, a man with a UTI might complain of foul-smelling urine, blood in the urine, cloudy or discolored urine, pain in the pelvic region or lower back, or discharge from the penis.

If you or someone you know has any of these symptoms, it’s important to contact a healthcare professional promptly. A doctor will need to prescribe an antibiotic for any UTI. Depending on the circumstances, doctors may also investigate and treat factors that could have contributed to the UTI or make a referral to a urologist.

To help prevent UTIs, men can take many of the same steps as women. The International Society for Sexual Medicine has this advice:

Men, especially those prone to UTIs, can also try Cystex Urinary Health Maintenance to help maintain urinary health. Ingredients include a prebiotic to help promote healthy bacteria, an anti-inflammatory to help to prevent tissue damage, an anti-adherent to discourage bad bacteria from sticking around, and an anti-oxidant to generally help protect the body.

While waiting for doctor-prescribed treatment, over-the-counter Cystex® Plus Urinary Pain Relief Tablets can help men AND women relieve the pain associated with a UTI and keep the infection in check in the interim.

Looks like men and women aren’t so different after all.